John McManus was interviewed by Joe Mont of The Street for his article, “Debt Crisis Could Change Estate Tax.” John had this to say:

Thus far, changes to the budget compromise reached earlier this year between President Barack Obama and Republicans on the Bush tax cuts for the wealthiest and estate taxes have been spared any effort to boost national revenues.

But legacy plans may still need to be revised sooner rather than later, says John O. McManus, founding principal of New York- and New Jersey-based McManus & Associates and a tax planning expert.

Currently, a patriarch or matriarch can give children, while they are still alive, up to $5 million without triggering the gift tax. Doing so allows that money to be spared a 55% tax hit via a so-called “death tax.” The $5 million limit could also be used upon death to shelter a portion of assets. Before the budget compromise, that limit was $1 million.

McManus says the real advantage is in being able to give away that money while you are still alive, but the ability to do so is in danger.

“The way that the Democrats negotiated the deal, and the way it was set up, is that it was only an extension for 24 months,” he says. “This whole thing evaporates Dec. 31, 2012.”

Given the tremendous wealth that will shift from aging baby boomers during he next 20 years, Democrats have taken “some solace” in the fact the compromise is short-term, McManus adds.

“They don’t want people giving away $5 million because 10 years from now that $5 million would have been $10 million back in the client’s estate and they would have gotten a 50% percent tax on that,” he says. “Because of the mounting debt crisis, there is a risk here that the first thing in jeopardy here is the amount of money that you can gift away … There clearly is looming a freight train coming down the track. We can see the smoke billowing and the light flickering. It is far enough down the track, but it may be picking up speed.”

In the meantime, so long as the gift tax exemption is on the table, McManus sees it as a “massive opportunity.”

But there’s a catch, he says. Read the rest here.

Professional advisers are pushing two new maneuvers designed to help small-business owners save for retirement or pass down their companies to heirs. While the strategies can make sense for some people, they also carry risks.

John McManus, an estate-planning attorney in New Providence, N.J., says that thanks to the higher exemption, he has worked with clients to set up this strategy “multiple times more frequently this year” than in the past. The maneuver can make sense for owners of stable businesses who would like to pass them along to their children eventually, but who can’t afford to quit receiving an income from that business, he says.

Here’s where retirement income comes in: You then set up a payment plan for 15 years of about $70,000 a year, plus interest. That means each trust would be getting about $125,000 in income a year and making a payment of roughly $70,000 back to the parents, Mr. McManus says.

You would have to pay a lawyer to set up the trusts, of course, and the income they generate would be taxable—and you would be responsible for paying those bills. If the business has a bad year, you can restructure the debt or forgive that year’s payment, though you may incur additional income tax, Mr. McManus says. 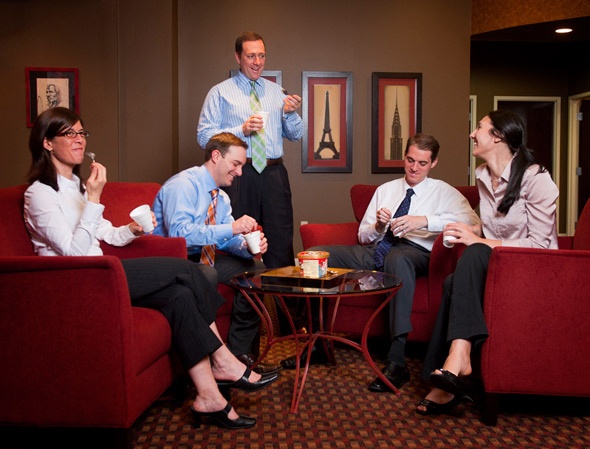 We’re proud to announce that New York Enterprise Report has chosen McManus & Associates as one of the 10 Great Places to Work, citing our modern client philosophies and the opportunities and benefits offered to our employees.

“Forget the stuffy offices full of dark mahogany furniture found in traditionally conservative firms of estate and trust attorneys. McManus & Associates has created a modern law firm, both in interior design and client management philosophies. The firm encourages employees’ personal ownership of the work product within the framework of a team approach. Each employee becomes an integral part of the entire process.”

Financial advisers play an increasingly important role in helping wealthy clients get the most bang for their philanthropic bucks. Increased scrutiny on philanthropic organizations is prompting individuals and families who give to non-profit groups to investigate whether their money is producing results.

Donors should examine organizations’ financials to see how much of their money is actually going toward the work of the charity, as opposed to administrative costs, said estate attorney John McManus, founding principal of McManus & Associates.

“Donors are looking for real, true examples of how their money is going to be applied,” he said.

When most people picture a painful tax audit, it’s the Internal Revenue Service they see behind it. But a state tax man is just as likely to knock on the door these days.

While audits seem to be proliferating, “they aren’t necessarily prevailing,” according to John O. McManus, an estate lawyer based in New Jersey. Taxpayers may be able to prove their returns were accurate and their strategies valid.

New Jersey is looking closely at certain kinds of small business, including pizzerias, doctors’ and lawyers’ practices. Along with others, it also looks at people who move to states with lower tax rates such as, say, Pennsylvania. California pays close attention to New York- and New Jersey-based companies with business on the West Coast, according to McManus.

John McManus contributes his thoughts on reviewing your own estate plan in Forbes Magazine’s feature, “The Inheritors”:

Review Your Own Estate Plan

If you should die tomorrow, what would happen to your inheritance? If you’ve kept it in a separate account, it’s easier to make sure it goes to your own kids, not your second spouse, points out John O. McManus, an estate lawyer in New Providence, N.J. But consider if your own heirs can handle the money outright or if it would be better to have a trustee dole out money to them from a trust, according to parameters you outline.

Meanwhile, if you’ve inherited a substantial amount, check whether it has pushed you into estate tax territory. You can currently pass on up to $5 million to nonspousal heirs free of federal estate tax. But 22 states and the District of Columbia impose their own estate or inheritance taxes, often at much lower asset levels. To avoid these taxes you may want to make gifts to the kids while you’re alive.

Read the rest of the article here.

Check out John McManus’s letter to the editor regarding the gift tax exemption on NJBIZ.com:

As part of the extension of the Bush tax cuts, Congress recently brokered a deal to include the single greatest “gift” tax relief of our lifetime. For many, it’s an unknown secret that up to $5 million can now be gifted away without the payment of any tax. However, this opportunity is set to expire in short order: the $5 million gift tax exemption only stretches to 2012.

Estate planners often recommend that clients push assets into their loved ones’ names to minimize estate tax and ensure that the future growth of such assets is off the client’s balance sheet. Until this year, a roadblock was quickly hit, as gifts in excess of $1 million suffered significant tax levies at confiscatory rates of up to 50 percent.

To take advantage of this unique environment, business owners and fortunate families should now gift assets, including company interests, into trust for their loved ones. Being a gifting donor does not necessarily mean gifting control.

It’s also important for business owners not prepared to gift away portions of their company to know that they have another option: Selling a non-controlling portion of one’s company to one’s children, in trust, will allow the children to utilize the revenue from that transferred portion to pay off the parent and business owner over a period of time.

An additional advantage of transferring non-controlling interests is that the business owner may enjoy a discount on this value. President Barack Obama has already indicated that he wants to radically cut back or eliminate valuation discounts when the transfer of business interests is between family members.

Move quickly, assess the relative advantages of these strategies and act resolutely thereafter. Missing this twilight period could prove to be taxing on your mind and your balance sheet.

John McManus is quoted throughout “Neglecting Estate Planning Is a Grave Error”:

Many people don’t bother to create an estate plan because they don’t think they have enough money to make it worth the effort, but John O. McManus, an estate attorney and founder of New Jersey-based McManus & Associates, points out that you don’t have to be a billionaire for your estate to add up. If you have a 401(k), life insurance, and a house that appreciated in value despite the downturn, your estate is likely to surpass $1 million. If you’re a small business owner, that total can skyrocket.

Avoiding estate taxes and probate fees is where smart estate planning comes in. McManus says that whether you want to leave your money to your spouse or your dog, getting expert advice to spell out your wishes in a will — and possibly a trust — is a smart idea.

Forbes’ Living Well in Retirement article, “How To Make The Most Of Your Inheritance” quotes John McManus:

John O. McManus, an estate lawyer in New Providence, N.J., has clients who used an inheritance to buy a beach house, an asset the couple viewed as appreciating, and as a memorial of sorts to their parents. His clients’ thinking, he explains: “This is place for the extended family to congregate and reminisce, and it supports the family values that grandma and grandpa espoused.”

The January, 2011 issue of Avenue Magazine features an article by John McManus, Is your estate protected in 2011?:

Now that the estate tax debate in Congress is over (for now), there is no better time for individuals and families to take action and optimize their estate plans. As we embark on a new year, we must resolve to capitalize on estate planning strategies that will not only spur asset growth for our heirs, but also ensure that a legacy of values continues for our loved ones.